Not this again… please provide evidence. Noticed you just joined the forums too

We have already been told that AHK is fine as long as its on one toon and not spamming chat. As the GM told you it was due to YOUR use…the way you were using it caused the infraction…not just its use.

Please stop the fear mongering because most of use some form of it and have had no issues before or now…just you…stop using it in a way that goes against the ToS.

BTW…you would not have gotten an 18 month ban…so just stop.

I’ve deleted the post, wasn’t expecting such a toxic response for trying to warn others.

As for “you would not have gotten an 18 month ban”. You’re right, it was 18 months and 8 days for some reason.

I may update again if I get another ticket response. I may not bother. 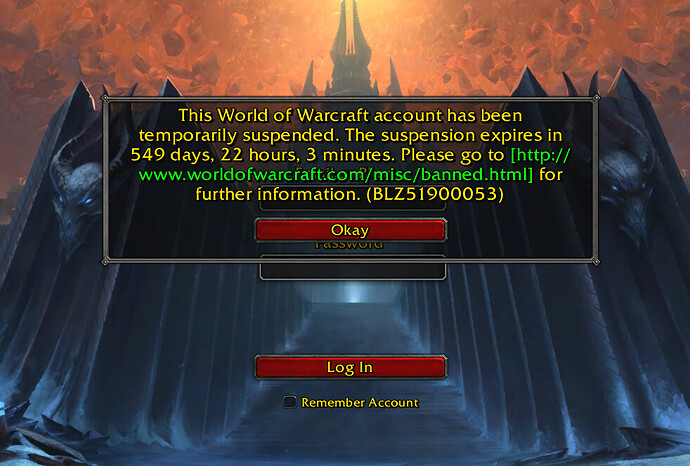 response is not toxic, just so many ppl come in and say AHK got me banned, but never provide evidence

the fact that you just joined, is also suspect

We have already been told that AHK is fine as long as its on one toon and not spamming chat.

This is a big complete myth that people tell themselves over and over again so they can sleep at night. People read they are after the multiboxers so we are safe and have perpetuated that like fact. As I have been saying MANY MANY times Blizzard have not changed their stance on AHK nor have they come out and said anything different since Nov 2020 with regards to IBS. AHK along with GHub/Corsair/Synapse etc are 100% bannable. As soon as you use one of these you are in risk of being banned.

Blizzard have however said they investigate each case they see on a case by case basis. The how you use this may mitigate their decision however they may also just go - “banning you for AHK” if the GM is having a bad day.

From the people who have been banned these are the common elements that have happened to more than one person. Note people are getting banned for doing just one of these:

As soon as you use AHK/GHub/Synapse etc you are playing a different game - the how much risk am I willing to take on because I am dicing with banned game.

Do I use AHK - yes. I use the hold down approach which stops the macro as soon as I let go of the key and I run at 225MS. Why this as opposed to a toggle? I am 100% determining when the key is being clicked and it stops when I run out of fingers ie I have to let it go to do other things like spam interrupts or move in some cases. Am I still risking a ban absolutely.