Purr and Roar - Named after my original two button macro set, this works by casting “PURR” as a combo point builder until you reach five combo points, then finishing with “ROAR” as the spender macro. NOTE: I no longer use ROAR. I have Rip and Ferocious Bite on their own buttons. With Sabertooth as the level 1 talent, Ferocious Bite will add 20 seconds to Rip (if firing with the full 5 combo points.) Spamming FB after the first Rip keeps rip up indefinitely. If you prefer you an use the simple macro, add it or use the original Roar and it will rotate although not as effectively.

REVISED 2/15/20 I had switched to Balance at the beginning of BFA, but it had been nerfed recently and I really missed playing Feral. So I’ve spent the past few days revising this macro set. The biggest change and one that requires a little more effort is the switch of the spender macro to a simple macro.
PLEASE NOTE: Roar is now a simple macro. Start Roar with the SHIFT modifier to apply Rip. Then spam the assigned macro button. Ferocious Bite then keeps Rip up and active until you stop your rotation. If Rip drops off, apply the SHIFT modifier again and repeat. If you don’t want to use simple macro, I’ll post the original ROAR in a comment below. ALTERNATIVELY, you could make it a three button setup with Rip and Ferocious Bite as their own buttons, something I started doing with my 17 (or so) button MMO mouse.
ALSO REVISED: Talent Choices - Changed the first tier from Lunar Inspiration to Sabertooth. Changed the last two tiers are now Brutal Slash and Bloodtalons. TALENTS 2X1X122.

Regrowth is part of the macro set, but you could delete those three lines from Purr if you didn’t want Regrowth included. Having it included improves survivability. And while it doesn’t appear to use any energy while in cat form, it slows the use of energy down, which is not a bad thing. These macros do tend to run out of energy during prolonged encounters and so you will get an occasional “hang.” You can expect to wait for energy levels to rise enough to cast the next attack.

Changes from the previous set include:

So here is Purr. Spam until you reach 5 Combo Points (for maximum DPS.) Hold down SHIFT as a modifier to cast Beserk for maximum burst DPS.
dWZndaGEOQQxIczxqv41OGwhkLztvEmIBIs8lv52uYHvStv1Eb7Mk7xQZlGggumocAGqvQHIsAWsgoLYbHQOtdvogrhhf1cHQKLsPQflKLRK3sipvLLHQNJ0erHAQc1KrrA6KUSORII4zqPRtrBeQk2kuvzZcQTdvL2Ms1SOQMMa8DcLrIcmwuQgnf8nb6KeQUff6AkL7rPYDjW5eKFdzqcXWxchRmXE7HphIHJbPNnpCogcNbvTrz79edjM3G)bAnKfIIheK1tFUumJQyiJrMQICgTgYczKMQrBMRLXXXuJl0SEbSTheU4XlDkfoUp7(sF29L(CFoC4PPAaTG7SHZ5ggMl8MjQHCbhlJZC8e3P5cFtNId5a8cogKE2GlE8sNszRlo7s2LCoCmodpMEk8LWD2sI4mg(smyHtCcYbhCSmKfc)YffhYrHy4lHy4lH7rgQ2LicYkAubDXLydUha85W9idv7sebzfnQGUWkXShcd8Xc3JmuTlreKv0Oc6cReZEimWpa4EKHQ0KzZ0rYU6AL0uTJGSIgTRUKc5C)U24CPFxsHCo83G7rgQstMnthj7QRvst1ocYkA0U6AJZL(DjfY5(DTX5s4Vd3JmuLMmBMos2vxRKMQDeKv0OD1LuiN731gNl97skKZHFq4EKHQDjIGSIgvqxyLy2dHb(cH7rgQ2LicYkAubDTXLbHJvevzzileedkCNM2WhthrXHCWDjZMPtXnEWXOmq7tVCOjedFjCpcYrrEzxJPImDud4cRDHb(C4EKHQDjme2D4JfUhb5OiVSRXurMoQbCH1UKGchRRKLHSqqmOWXOmqwxjLcXWxc3JmuTlrouy0YInUGUcUle(C4EKHQDjYHOAoEQbFhIGSIgvqxBC5g8Xc3JmuTlrwiMYg1aUWQGUKy2dTjbfuqbfuaa

and Roar. REMEMBER TO HIT SHIFT WHEN YOU INITIALLY CAST TO APPLY RIP. To make a simple macro, hit enter to open the chat console in game, then type /m to open the simple macro app. Click new, pick an icon and name it Roar, then paste in the following code.
#showtooltip Roar
/cast [mod:shift] Rip
/cast [nomod] Ferocious Bite

Test of the macro is now on YouTube. DPS topped out at nearly 10k, which isn’t typical. It normally tops out at around 3.6k. DPS is typically around 3k. I always test on this single target Raider’s Training Dummy in SW. Video shows location, gear and talents.

*Note: this is the second test video. For whatever reason, I didn’t have any legendaries equipped for who knows how long. I’ve now equipped Behemoth Headdress and Chatoyent Signet. ilvl is 241 with this gear.

I recognized when i copy/paste with this, its woorking lol

Nice one again, I always like using your purr and roar macros.

Could you tell me what leggos and ms you are using,

Could you tell me what leggos and ms you are using,

Thanks for the compliment.

When I checked, I didn’t have legendaries equipped! It’s probably been that way since the update. I’ve equipped Behemoth Headdress and Chatoyant Signet and my ilvl is 241. DPS is increased significantly now. Go figure.

In the above YouTube video peak DPS hit 9,957 at one point. Looking back through the video, one attack registered 179,593 damage. What in the heck was this? I cleared the logs without looking as I hadn’t noticed it at the time. Anyone have any idea what that was? I think I’ll post this in the general forum as well. 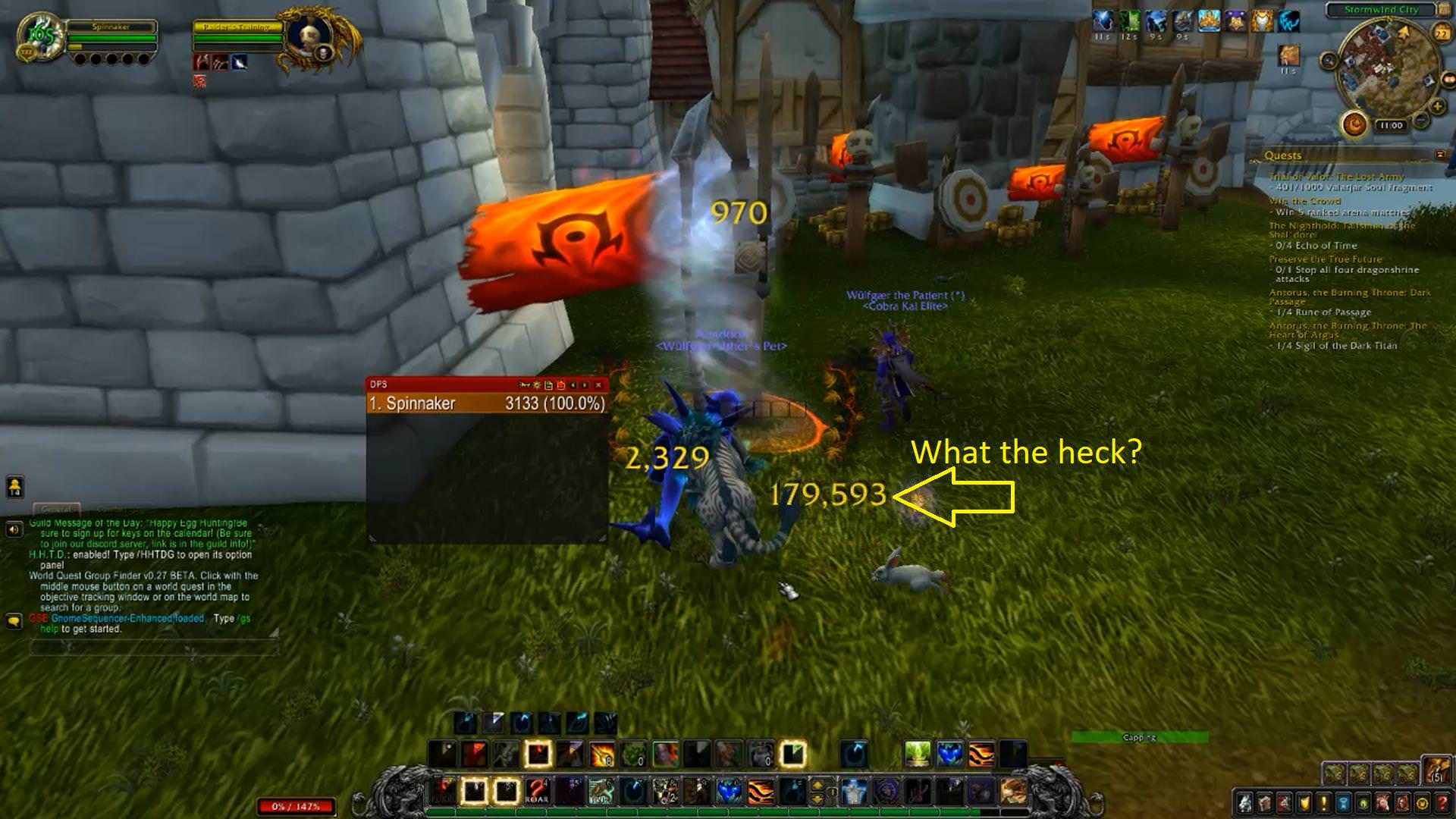 your macros are amazing i used them in legion and i will use them now at with 216 ilvl im getting constant 21.5k dps. thank you for sharing just one thing i keep getting the you are in shapeshift form pop up

Sadly, the Stormwind dummy is plagued with rats and rabbits - looks like you hit a rabbit

These are far lower level so damage (and dps) spikes.

With hugely careful positioning you can avoid the rat, or the only raider dummy I’ve found that doesn’t have ‘adds’ getting in the way is in Ironforge.

THE PURR ITS WORKING THANKS BUT THE ROAR NOT WORKING FOR ME?CAN YOU GIVE ME MORE DETAIL PLS

Thanks so much for the macro Spinnaker, I never could figure out the talents. Was early when I was reading it after a short night of sleep. Could you drop me a note on them please

Thanks so much for the macro Spinnaker, I never could figure out the talents. Was early when I was reading it after a short night of sleep. Could you drop me a note on them please

Hey! I love your macros really making me love my cat even more!
But with this one I have an issue… Every time the macro hits Moonfire it puts me in my normal form and isn’t going back to cat… Why’s that?

Hey! I love your macros really making me love my cat even more! But with this one I have an issue… Every time the macro hits Moonfire it puts me in my normal form and isn’t going back to cat… Why’s that?

It sounds like you don’t have your level 15 talent set for Lunar Inspiration. Enabling that will allow you to attack with Moonfire while in cat form.

This happens at times when the macro is trying to cast Regrowth, which can’t normally be used while in cat form. However, it can be used whenever the “proc” is up for it. The macro instructs to stay in cat form as you are casting Regrowth. The code in the macro looks like this:

So if the proc isn’t up, you see the message that you are in shapeshift form. If you put Regrowth on your toolbar the icon will glow when the proc is up for it. I hope this makes sense.

Hi, I made an account just so I can could get some help. Purr seems to work fine, but Roar does not. The icon stays as a “?” and nothing happens when I click it. I’ve never had issues like this with a macro before so I was curious what i should do?

I think the problem some people are having with the 2 macros is the level 75 talent Incarnation: King of the Jungle. When you take this talent, Berserk gets removed. The Berserk line in “Purr” might be hanging up sometimes when “Roar” gets mashed.

I haven’t tested this out, but saw the possible cause of the reported problem.

I’m going to check it out, and will let you know if I see the issue.

The Berserk line in “Purr” might be hanging up sometimes when “Roar” gets mashed.

Yes! I appreciate you catching that. I’ve updated Purr now. Thanks a million!