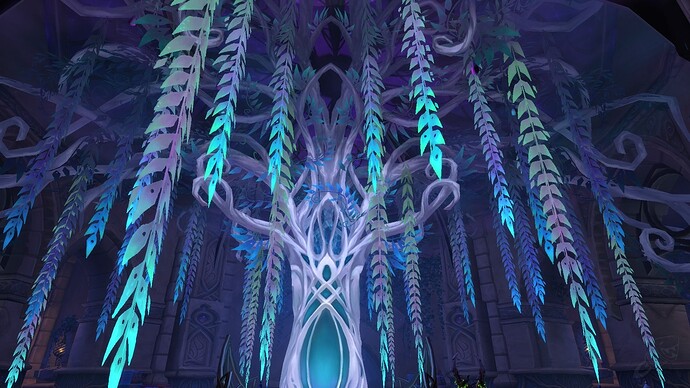 Have you ever dropped your Wild Spirits, Earthquake or AMZ on the ceiling or the random lamp post in Halls of Atonement? Players have found out that you can use macros to target friendlies or enemies with Reticle-based spells without having to worry...

@TimothyLuke is this going to be a game changer when talking about “Earthquake”, “Flamestrike”, “Spear of Bastion”, etc? Or is it something that’s been in game for a while and I’ve just been living under a rock? Or a bug that Blizz will fix? What do you think?

I have tried with this setup and it works like a charm!

maybe? Not sure what you are asking me.

Its a bug at best and an exploit at worst. I wouldn’t be surprised if its patched out.

Yeah sorry wasn’t too clear! I just saw potential in making macros with this and was hoping it was something permanent! Not that @cursor doesn’t do the exact same thing, but I’m one of those who sometimes can’t aim right lol!

Not sure myself, but i think this might be an actual permanent thing. I don’t think they’d make a bug using @target. I mean, that’s like saying @cursor, or @focus is a bug, at least in my brain of brains. i say we give it a while, make some macros using it, if it’s fixed then we know it’s a bug. i highly doubt it’s an exploit though, otherwise Blizzard wouldn’t have made it public knowledge like they did. I think they like catching people using exploits to ban them, lol. like i said, just my brain of brfains. XD

Note: though, when i think about it, why would you want to use @target anyway? if you have a tank selected with @focus, then pretty much all targeted spells would be cast @focus, right? like, wouldn’t you want earthquake or flamestrike going off at the tank, which is where the most mobs would be grouped at? again, just my brain…

@thezeldrak I see your point with the @focus, but that’s good in a group setting and only if there is not a lot of kitting involved. Solo play I never focus an enemy and in raid the focused tank is not always the one who’s tanking the adds/groups of mobs.

@thezeldrak When Blizzard implements something like this it doesn’t require repurposing some other thing. This is a bug with Blizzard’s SmartSelfCast doing things they were not intending. When they introduced @cursor they were VERY specific in stating that they didn’t want the behaviour that this bug enables. Otherwise, they would have allowed targeting to just work on @target which is what they were asked to introduce. They felt being able to use a group member or an enemy as an anchor for AoE targetted spells was too overpowered hence why it’s limited to @player or @cursor normally.

As predicted this was got fixed out today…

Indeed! Thanks for you input on the matter!

As predicted this was got fixed out today…

Yeah. I was hoping it would stay in, but as we all know, Blizzard’s credo is … “Fun detected. Must resolve.”