Creating my own DH macro and getting some annoying effects

I created a macro for my Vengeance Demon Hunter, my first action block is fiery brand but when I look at the Compiled Template it says Chaos Nova

Likewise all of the other vengeance abilities are translating to Havoc abilities in the compiled list. Is this peculiar to me? Do I need to fix something for my own configuration? Is this a known effect? 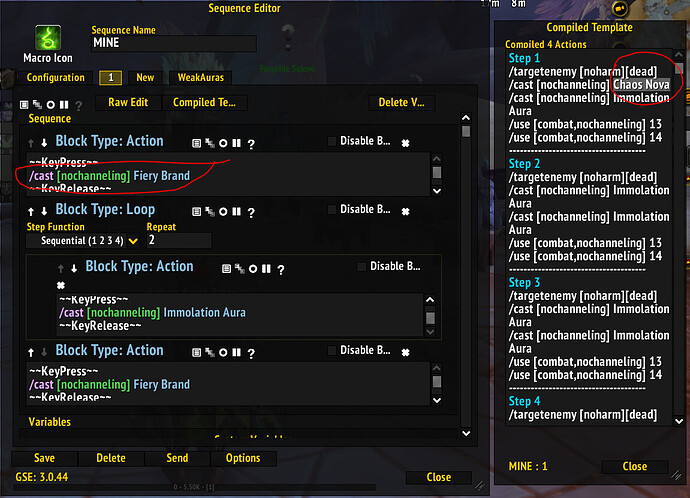 Working as intended: Two most asked questions: Base Spells and Macro locks

See the section on Base Spells.

You are specced into havoc. You must be in vengeance if you want to see vengeance abilities. Do not make any changes to your macros if it isnt in your current spec since it will overwrite current ablities over the original.

Everything you have written here @Curliuni is completely wrong. Your macro will always compile down to the base spec for each class irrespective of what spec you edit in.

When you edit in GSE you are not editing your macro. You are editing a template from which a macro is created to be executed. Each ability during the save and compile is converted to its BASE ability. For each class this will be a particular spec that is the Base spec. For Hunters its MM, for Priests from memory it’s Disc. For DH’s it’s Havok. When you change spec’s your UI tells you it’s casting BM spells or Vengeance spells - it’s not its casting the same MM or Havok spells under the covers. If your a BM hunter and from the UI you go /cast Steady Shot in the chat window - Cobra Shot will fire.

Why this matters is for spells like Chaos Bolt and Annihilation which have more temporary changes. If GSE didn’t save the base spell and you edited in Metamorphasis your macro would be stuck to casting Annihilation and would only work when you were in Meta. So instead it saves and executes the absolute Base spell and when it executes your compiled macro casts THE BASE spell. As each spec is itself a variant GSE uses the absolute base spell which is why the Compile Template looks to be in the wrong spec. (It also means you could using variables and if blocks write one macro that works for every spec.)

u have written here @Curliuni is completely wrong.

I was using the wrong search terms otherwise I would have found it myself. Thank you for the link… it totally makes sense now. Thank you!

Whenever i’m on havoc, and i’m going to my tank macro, it will say complete different ability on some of the abilities, same thing happens if you have different talents. I few times I’ve made a mistake and saved a macro while in offspec/talents and then had to rewrite the correct names again.

Edit: I can put a few pictures here tmrw when i’m on PC, so you can see what I mean.