So this is probably going to be the last macro i do for a while.
I still find the class clunky but have given up in trying to make it where Demonic Empowerment only goes off once every couple of casts but for some reason certain skills just get stuck and ends up in a loop when other skills are available. It’s actually pissing me off but hey ho.

As i am slowly starting to get back into WoW i have made this as simple as i can. It’s not a press and wait which i know many of you hate since it’s still 1 skill per press per GCD.

When i am running low on mana i tend to top up using CTRL while i am using Demonwrath and just before it’s fully cast, it’s not that much of a DPS loss to keep the macro going.
TKC using SHIFT when i have around 2 Dreadstalkers and 6 Imps… don’t always empower them but usually best to.

I manually bring out the Doomguard/Infernal at the start of a pull and works well.
If you want to add it in then add it yourself.

I do have another AoE version but i do switch talents for this ( i have a lot of tomes) All i change here is Power Trip to Hand of Doom to spread Doom and Soul Conduit to Summon Darkglare when i know there will be lots of adds. On the way to sisters for example.
Works amazingly well.

Press speed for this, since i know i will be asked is 120ms

If you wanna see numbers… 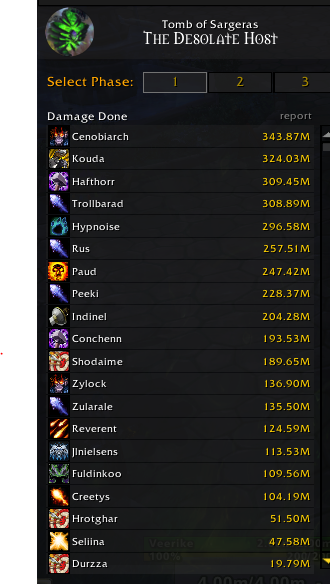 Thank man, hopefully you can make this a competitive macro for raiding