Hello, I’m Pentadragon, after I got the beta access and GSE also works, I started my first macro.

Of course I first took my main character, namely the enhancer shaman, to my regret at the beginning I had regrets because the talent tree is so big that you could hardly see through it, but I managed to create a first macro.

This macro is for level 70. But you can also use it for leveling, the macro then skips the sequence
the macro is based on M+ Elementalist Build when leveling please check that you elemental blast skillt early otherwise you have to replace the mod:ctrl with lightning strike 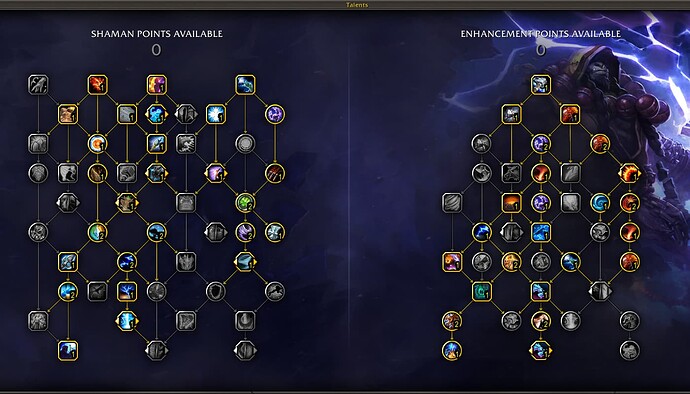 - auto Trinkets are off!!! change it when you need it.

Everyone is free to adjust the talents as he would like them or as he likes.

Otherwise, have fun with the macro and feel free to give me feedback, so I’ll adjust it from time to time as far as I can.

First of all thank you for your first Enhancement macro .

We need to make them as much macros as we can before 25 / 26 of October ( 95% prepatch release date ) so the disabled players ( in any form ) people can enjoy the game !

Long road ahead but were getting there steady .

PS: i Got bookmarked your post i Will try it ofc!!

Hello @Pentadragon, thanks for the enhance macro!!

Quick question as I am having an issue translating the following line from the KeyRelease variable:

The German to English translation of ‘Kochendes Blut’ is ‘Boiling blood’ (according to Google Translate)
I cannot figure out what spell this should be… I haven’t played Enhance since BC so I may be missing it.

Could you provide the English translation for this spell?

Look on wowdb, or wowhead even for the spell ID, easier that way.

Hi yes the translation is a bit difficult but for your question has
lloskka right look at wowhead & co.

but this time i give the answer the id should be 20572 and the name is blood fury.

tried this, doesnt seem to fire off anything but flame shock any ideas ?

I’ll update the macro during the day, I’m from Germany and the translation could be the problem, I’ll use the skill number for the new macro

Will then also bring in alternatives, it will not only be an AoE macro but also a single target

The macro has been revised and should work better now, have fun with it

you put the 2 macros together and you don’t know where one ends and the other begins. Could you leave a separating line or put a word? Thank you!

I don’t have much time at the moment, but I’ll get back to it when Blizzard has buffed/nerfed the talents, so I have to see what works best now.

hanks a lot. I’ll wait for you!

ive tried making my own macro and using yours nothing fires? just scrolls through everything but does not cast anything. any ideas?

Yes, the problem is known to me, I can not assess what it could be. When I tried to import the macros I had the same error he switched through the individual spells but nothing happened even when I recreated the macro nothing happened, but when I rewrote an old macro it worked. I’m afraid that it could be the GSE itself, I’ll have a look in the next few days to see if the error can be fixed. I may have had others experience with it and know the solution.

thats so strange because i just imported your macro and everything worked out of the box. The only thing I done since i havnt been on my shaman yet was delete everything for char specific macros in /m as well as deleting every gse macro in /gs because I wanted a fresh start with it being prepatch

After a little research, the problem was found, so it seems that there are some conflicts with old macros when porting to 10.0.0 (PrePatch).

That means and that’s how TimothyLuke (developer of the addon) (Discord) describes it, that all macros you had before and I don’t mean about the GSE but about the regular macros have to be deleted, at least if you have this version from me

GSE always saves the sequence as part of a macro so the game can call it up when you press the button. looks like that’s where the problem lies

As I said, I will update the macro in the next few days. I will then inform you, but as I said above, it is difficult because Blizz has buffed or nerfed a lot just before the release.

but first I think I will work with the talent tree that is currently on Icy Veins to give you a little overview.

So all together I did it (I hope) the new enhancer macros are there, but I had a few problems with the porting, otherwise I would have posted it yesterday, but it’s done look in the main post above there are now 2 macros for ST and once for MT, leave me a feedback and otherwise have fun

All of the Keypress commands are in German and won’t work on the US client.

I interpreted the translations as follows:

Ok, I’m surprised, can you please insert that as an image or text because I have it in English. All spells are made with Wohead’s IDs and the rest is only in English

Or does he do the translation despite the fact that I install the IDs, everything in German? that would not be good

Awesome dude. Thanks for this. Pretty good macro too. Getting close to 20k DPS on my ilvl 280 Ench Shaman with this.