How to cast more

It depends. What kind of macro is it? If the main sequence is a “Loop” and running “priority” as a step function, you can just put Storm Strike at the top. It would then always prioritize Storm Strike over the spells below it. 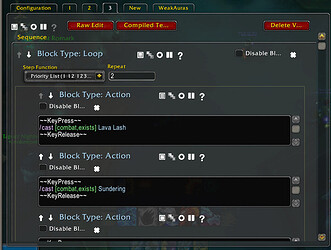 image720×543 91.6 KB
Thats a simple priority list. It will always cast Lava Lash, then Sundering, then anything below that.

But it always depends on what kind of macro it is. Could you export it and paste it here? Would make explaining much easier.

GSE is an alternative advanced macro editor and engine for World of Warcraft. It uses Travis for UnitTests, Coveralls to report on test coverage and the Curse packager to build and publish GSE. - ...

I haven’t made a macro I just use other ppls, I’ve never tried to make my own, not entirely sure how tbh. Just edited others to suit

How’s that work if I want it to prioritise a certain thing, but it’s further in the priority list? Genuine question I don’t understand it haha

Attempt order for a priority spell is

The 1’s are more evenly spread through the attempts.

You’re a wizard. Thanks mate haha gotta figure out how to make one now.