Need help with a macro

I’m having a hard time with the new addon version for some reason.

I’m looking for something fairly simple for one of my hpal buttons:

Priority would be: WoG > Holy Shock > Holy Light > Light of the Martyr

I’m not sure if my ms is wrong on my naga macro or if I need to use some variables or what, but I’m struggling with this. Can anyone help?

This simple macro should allow you to target someone and cast word of glory if available, then holy shock, followed by holy light if no mod is pressed, if you hold alt it will cast light of the martyr.

Now I am writing this in the forums if I have time tomorrow I will throw one together in game and post it here for you if you can’t get it to work. I am not 100% sure if that is what you are looking for.

I usually make my macros the way that you are suggesting. The problem that I run into is that the spell with no cooldown (holy light) wants to queue up and cast more often then I want. Holy shock and word of glory don’t reliably cast first. Most of the time it works correctly, but not as often as I’d like it to.

I’ve tried turning up the ms on my mouse macro. This will get the priority right, but holy light will take too long to queue up when the other spells can’t be casted. When I speed it up, holy light is cast too often.

yeah, that does happen. And holy light will always cast more often, holy shock has cool down, and word of glory needs to build up. Why I suggested the priority top, so the macro will attempt 1 then 1,2, then 1,2,3 and so on so every time you press the macro it will attempt the first block in the loop before trying the next in the progression. But holy light will still cast more often like I said because it is up as long as you have mana, as is light of the Martyr. Why I put it on a mod so you can force macro to use that spell when you decide to use it.

To delay Holy light add a pause block in before the holy light block - start it at 2 clicks.

Or add a block before with the [mod:alt] part but not the other part this will do nothing on that cycle or if you have alt down do that stuff,

Also have a look at reverse priority as an alternative to priority - it’s A lot smoother.

Thank you sir! I will try these things.

Any chance we could see a good video tutorial for the gse3? The blocks are awesome, but I know I’m barely touching the full potential.

I believe Tim doesn’t have any videos out for GSE 3 but he has these: 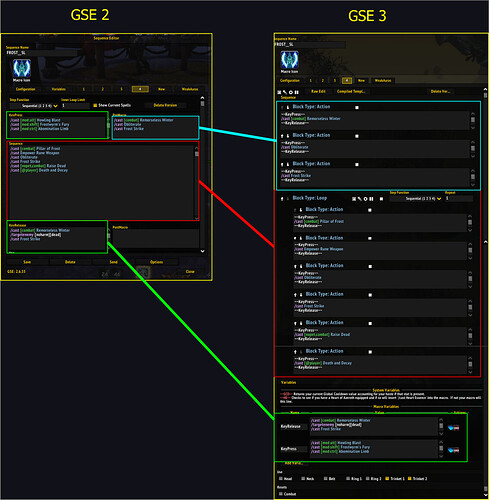 GSE is an alternative advanced macro editor and engine for World of Warcraft. It uses Travis for UnitTests, Coveralls to report on test coverage and the Curse packager to build and publish GSE. - ...

That will help me a bunch, thank you!

Just remember: Only one GCD per action block or it won’t fire off properly.

The other one I would add is GSE3.0 Block Specification · TimothyLuke/GSE-Advanced-Macro-Compiler Wiki · GitHub

That last one gives an overview on each block type and how it works.