hey guys i always see 250ms as bets for macros to avoid bans ect but as most use ahk and 250ms is set but also razer is meant to be .250 i always thought its very slow and to avoid banning i spammed to see how fast i could casually do it and these are the numbers 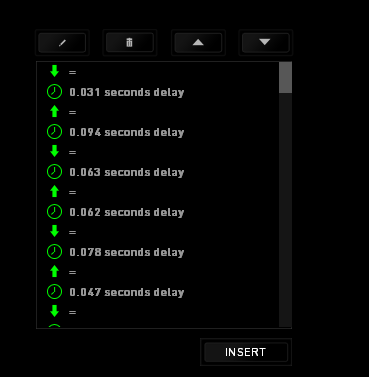 does this mean if i spam and can get around .50ms average manually i can set it to .50ms in razer syanape 2? or spam it as fast as i can and use that as a macro to spam my button?

The thing isn’t about burst. It’s about being able to sustain that speed consistently for 8mins. You can run at 50ms if you want. Just don’t come back crying when you have been suspended.

Forgetting that for a second how bout using your brain. I know thinking is hard but the average cool-down is 1.3 seconds. At 50ms that’s 26 clicks between the first line of your macro and the second that will be executed. After that point you may as well take a bunch of commands and go just execute one of these randomly. This will at best lag your client costing you dps while at worst disconnect you mid fight. Good luck trying to figure out what your macro is doing. Is your macro so crap that the only way it’s going to work is to put it in pure random mode and hope for the best? In which case I would be suggesting that the fix isn’t faster ms but using your brain to build a better macro.

i totally get that and thats why i usually only use 250ms and some 200ms, but my main issue would be is 250ms on ahk the same as .250ms as when i set mine to .250 it seems to run really slow and my guy would take ages to cast anything.

It depends on the measure that synapse uses. If it’s seconds you want 0.25 instead of 250