I’ve been updating a lot of Elf’s macros, and this is one I wanted to share that my wife uses.

With Dragonflight, Fire Mages have 3 or 4 different builds that are very high performing. Some involve more AOE and also use Hypothermia as well.

This build is a bit different but closer to the standard Fire Mage. This is known as the Ignite Cleave build, in which Fire Blast will spread Ignite damage to 4 other targets. For this build to be successful, you will need to improve Mastery more than any other secondary stat.

v1 - DF Update, removed Flamestrike from macro. The shift key is still used for Pyro.
v2 - Updated with Stopcasting code (Thanks @Baelzebub for the fix) also added Flamestrike, as Ignite Cleave is not very powerful at the moment. 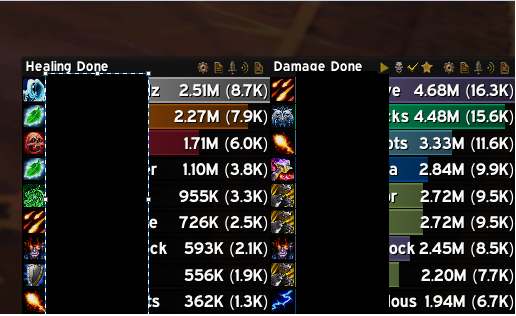 So I tried this out and it works so well. I was 3rd on dps, with 10 item levels lower then the top 2 dps.
Fight: Heroic Xy’mox

On my Mage I use this, my wife is much better at playing her Mage than I am, but I wanted to stick with an old-school style. Though it sucks that Flamestrike is gone, I guess this is the new style Blizzard is envisioning as I am seeing this in other classes too.

Hey mate what is your ilvl and do you combust manually and this is just the filler or?

My item levels suck I think it is 180, I don’t play my Mage a lot. My wife’s is 284. @Elfyau had Combustion added into the macro, you could manually control it but in Shadowlands it was on a much longer CD, whereas in Dragonflight you now want to cast it in every fight whether it’s Single Target or AOE as it empowers your spells now.

Hey, so it was automatically combusting on its own. only thing you need to do extra is pyroblast.

Yes on the Combustion that was built in by @Elfyau originally.

As for Pyro, I put it on a shift modifier you can use this for both instant cast pyros or hard cast pyros when you get the buff.

Not to bad at all

In keypress you might want to add:
/stopcasting [mod:shift]
before the pyroblast. This way it will cancel any spell being cast and fire Pyro when it’s on instant cast rather than waiting when you hold the shift key.

That is a good idea, the only reason why I don’t is because of lag and how spell queues work. But if you want to add it might be helpful, for me I play on a server that is very close to my home location, so I don’t have to worry about the lag.

No, it’s about not having to wait for a fireball to finish casting before you can cast Pyro . Not a lag issue

Thanks for the fix, I added that to the macro, took a while to get it working but got it working to actually stop cast, which actually makes the rotation flow better

I’m switching to a mage main and I can say this is looking promising. We’ll see how my leveling goes though

Updated talent code? Current one says it was from an old version.

“I’m gonna put this out in here and soon on WLM. please don’t ask if there a level 70 update soon. let the man enjoy the game at his pace and he will get them out as he gets to them. if you want something between 61-70, then edit the macro yourself. Elfyau got RL (his son and his health) he has to worry about first, then ACTUALLY trying to have fun in the game himself, then the Macros. Thank you for your time.”

From Elf’s Discord by Siodar.

Yea guys it takes time to level, hell I have a full-time job and a wife to take care of who just had major surgery. Please be patient.