Moon's WW with Strike of the Windlord and Chi Burst

The macro is more PVE but can be used in PVP. If you’re looking to rate content though, I would not recommend a macro.

Some classes can work with PVP and PVE, like MM Hunters, BM Hunters, Locks, and a few other classes because the rotation is similar. Monks, on the other hand, it’s not.

I was wondering if everyone is using the same spec and macro for Raiding on single target fights and AoE fights? I am going to test this in Normal VOTL tomorrow and wanna make sure I have it right! TYVM!

Yes because specific abilities are auto-cleaved, like SCK and FOF. It’s best to use the same macro for both, when I did VOTL the other week, I was #3 on DPS overall, using this macro and pulling nearly 60k DPS.

Right now the 3 most DPS classes, that work well with macros are WW Monks, Aff Locks, and MM Hunter, all 3 specs I’ve been able to get 55-65k DPS depending on the fight. The lock is getting more gear so on good fights, I can easily do more.

I am wondering what numbers people are getting in practice? I like this macro very much and it served me well through the grind so far.

Currently I am simming at 51,969 (ilvl396) on single target training dummy and 60k Hectic add cleave, how ever in practice I am getting around 34-36k on the single taget training dummy, I assume this is because of the lack of ToD in that situation, on AOE trash I hold between 60-80k on the cleave dummies.

In dungeons my 16 CoS I just did I held 38.5K over all, on trash mobs I held 68.3k fully buffed. In vault my numbers are bad, on all bosses except Terros and Council. I don’t remember specifics but like 20-26k.

You’re getting lower because of your MS. If you run it at 100 ms you’ll get 60k easily.

If you use AHK, you won’t get the results intended. I give AHK as an option, but you should be using iCUE, Synapse, or other keyboards macro software that way you can get the highest numbers.

I have run raids and M+ with this, and I’m on top of DPS by a long shot. The only two classes that give me a run for my money are MM Hunters and Affliction Locks.

I’m using Logitech g hub, if I run at 100ms or 250ms I get close to the same on the training dummies in Valdrakken. IDK whats going on I’ll have to run some more dungeons and take reports from there I guess.

at 100ms on the training dummy for 1minute
Details!: Damage Done for Training Dummy [1:05 EF]

There is the issue, dummies. You can’t cast certain spells on dummies like ToD. There are some others like SEF that don’t work well on dummies.

Go run an instance and look at the overview of details throughout the whole instance. You should be in line with Raidbots’ Dungeon Simulator.

I tried ICue with my KB to see if it was g hub and my mouse but the results are the same, I really don’t know whats so different about me that I don’t get near what everyone else is getting.
just ran a heroic, Highest peaked was 50k on the last boss, all other bosses was 38-40k
ran LFR brood keeper to test too but we didn’t get her down but my highest attempt on her was 38k.
all while running at 100ms on both software.

the dungeon slice sims me at 60k, no buffs, on large pulls I can get that but on everything else it drops off to about 38-40k. dungeon avg was 38.5k (Heroic HoI)

anyway, good work on the macro, it’s still the highest performing one I found. I will continue to try to figure out where my disconnect is. my server latency is low 30 server, 55 world.

You should be getting higher, check to see if your trinkets are firing. That’s usually the suspect for low DPS other than MS. Also are you wearing 2 PC or 4 PC? If so there are some subtle changes that others have proposed that might be beneficial for you.

I am currently wearing my two piece, I have a WA to let me know when to hit shift if SPK is up for dance of Chi-ji if it looks like the macro is going to miss it. I also use JeremyUI for my monk as it has a math based spell order slide though this macro seems to be hitting the right spells when it says it should.

I had both set to toggle mode so it would keep the macro going til I hit it again.

for ghub (mouse) I have it using the standard delay of 100ms.
for corsair icue (keyboard) I set up a macro to press the key with no delay in between press and release. my macro is on with a delay of 100ms repeat.

side note: the WA in the macro itself doesn’t seem to fire when imported, WA tells me its from shadowlands and may not work. I just found another that does the same thing though

Oh yeah as for my Trinkets, I have the Windshear Whetstone, which I fire manually because it’s more situational, IE Big Pulls and bosses, my other is the homeland raid horn which fires automatically
I have the whetstone macro’d with my white tiger statue that I have drop generally at the start of pulls. This will spike me to 60-100k but drops fast after its done. if the pulls last long enough to fire again I will redrop my statue and whetstone as they have the same cooldown time.

this is what I was using 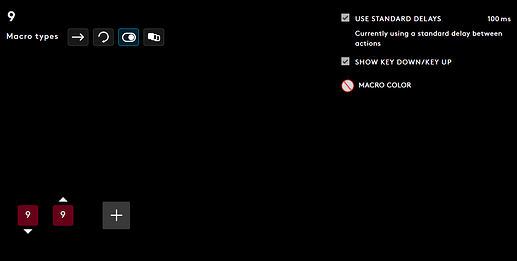 I enjoy leveling my level 35 monk with this macro mate. Althought, there is a tiny breaks in between… I think I can tweak it a little bit to my use. Thanks Again!

Some of the breaks are due to GCD issues. Not all abilities are on the GCD for Monks.

Just to let you know, the talent string isn’t working. I’m leveling my monk and I reference it every few levels

It’s been changed because of the patch. I’m working on a new version that updates with the patch but I haven’t gotten around to it yet. I just finished my Aff one, and wrapping up any issues there and then I’ll get back to my other classes.

edit: hold without buffs (wind, fire and earth etc) only makro with normal rotation 31k dps with ilvl 386 on ST - in Town
and i play with synapse at 150 ms. Test it now in a M+

edit: i changed a bit and have with 386gs in court of stars on bosses around 45k - 60k and overall 39k dps i think thats great

Yes, a lot of changes due to 10.0.5. … Give Moon the time he needs to update the macro. He is quite busy in RL right now. … If the actual macro works for you, even better.