I keep seeing people ask this is Discord. GSE is not “Input Broadcasting Software”. It’s a mod that is entirely contained within WoW’s allowed API and is limited by WoW’s rules for what a mod can do.

Corsair, GHub, Synapse, AHK, Punchkey etc ARE Input Broadcasting Software. This is not news and has been covered very extensively here: Bots, Botting and the thin grey line.

If you are concerned about how to spam a macro without using one of the above it is very simple. Bind your macro to your mouse wheel and scroll.

So wait, I thought it was only Input software that mirrors keypresses to multiple clients. Programs like AHK or Synapse don’t do that. Can you explain why you said we shouldn’t use programs like Synapse or AHK?

Its my understanding that blizzard is target “Input Broadcasting Software” that sends the key stroke to multiple windows only. They are not going to start banning people for having there mouse software open. Those programs cant seed keystrokes to multiple windows only to the window in the forefront. AHK on the other hand is capable of sending keystrokes to background windows. They may start sending warnings out for that.

You’re missing the point AHK etc were already against the TOS for WoW. This hasn’t changed but if anything the risk is higher.

AND imagine players having between 10-50 msec spamminng

I personally think myself the issue is TO múltiple clientes plus botting behaviour. ( aka multibox software )

Something needed to be done, and this was the ir fair and needed answer

Mouse software Cannot and will. not be punished as far its behaviour endgame is not pseudo botting
.

Here is a Blizzard post about the issue Policy Update for Input Broadcasting Software Which Will Impact Multi-boxing - Wowhead News.

Just reads to me that they are specifically targeting input broadcasting software that sends the keystrokes to multiple clients. Using your corsair software, LGhub or what have you to spam one key in one client doesn’t group you with what their targeting.

However, one should always be cautious

AHK Is one of the applications that has been used by some Multiboxers to broadcast.

then ahk will be banned?

@edwandergreey
As we know there’re not any Warcraft Devs in this forum. So…how would we know? Oh, right, A BLUE post. That’s when we’ll know.

supposedly they’ve already been issuing warnings. Been using logitech gaming software and no issues yet. pretty sure its just a way to hit botters/farming multiboxers

I’ve seen screenshots of them from various forums, could be fakes though who knows

r/wow - Blizzard started sending out those warnings to a lot of people... 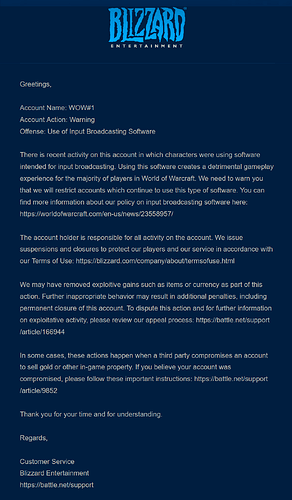 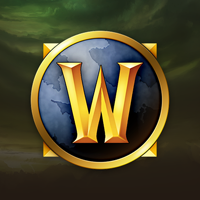 Can you PLEASE clarify a few things regarding multiboxing

Alt-tabbing is generally an easy way to describe folks selecting different clients. I’m not certain why this word debate is becoming the focus here. The focus of the announcement yesterday was prohibiting Input Broadcast Software, no other...

I had a GM repossessed early on regarding AHk. That has been overtuned since then.

Recent conversation I have had with a GM has been: Any third party tool that simulates a hardware action is explicitly against the TOS. This includes but is not limited to AHK, Razed Synapse, Logitech GHub, Corsair, Punchkey and Keyboard Maestro. In the last week there have been people banned for using synapse, AHK and GHub. The caveat is they do judge each case by its merits. Hold down does not seem to be being enforced at this time but toggles and things that hit multiple keys are. Attached to this are keys being hit at super human speeds.

I frankly don’t care what you do with this information. You can make your own choices on what risks are acceptable and what aren’t. I am just relaying that there is a fence and crossing, at your own choice, it may have consequences.

For sharing what @TimothyLuke said, and shed more light on it 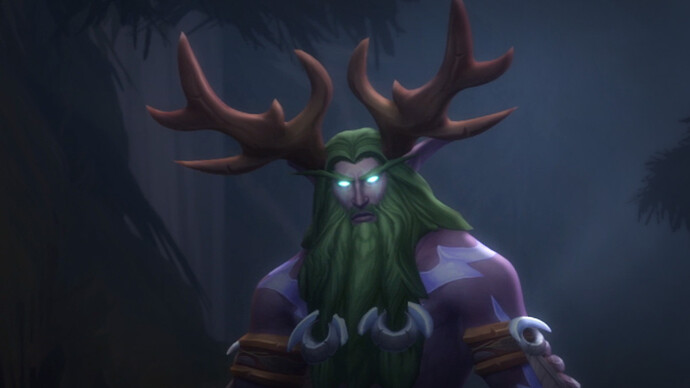 The use of input broadcasting software that mirrors keystrokes to multiple WoW game clients will soon be considered an actionable offense.

As World of Warcraft has evolved, our policies have also evolved to support the health of the game and the needs of the players. We’ve examined the use of third-party input broadcasting software, which allows a single keystroke or action to be automatically mirrored to multiple game clients, and we’ve seen an increasingly negative impact to the game as this software is used to support botting and automated gameplay

Multiboxing, or playing multiple World of Warcraft accounts at once, is not a violation of our Terms of Use. Please note, however, that use of input broadcasting software may result in account penalties.

So WE the users of your addon were not even remotely close to being watched ONLY IF WERE USING 1 GAME CLIENTE AT ONCE.

So as timothy said, take your chances, youve been warned.

PS: i see what you did there Blizzard, using Malfurion on OP image

@lloska I appreciate what you are seeing but you need to look at the bigger picture YOU AINT EVEN REMOTELY SAFE. All the stuff talked about here on the forums that runs outside the game WAS ALREADY EXPLICITLY BANNED BY BLIZZARD EVEN BEFORE THE INPUT BROADCASTING STUFF. You choose to use AHK in any way or Corsair or GHub or… you acknowledge that you risk getting a ban as you are using an unapproved by Blizzard third party tool.

While this most recent crack down is on IBS, one of the key pieces of software used by one specific multi boxing community was both Razer Synapse and AHK. Yes they are currently taking public action on this but they are also taking action on all the stuff they have already banned at the same time.

Please don’t link ignorance, the assumption that they haven’t targeted me yet so they are not going to and false hope and call it truth. One of my close friends accounts was banned in the last 48 hours simply for using AHK on a toggle. Another was banned 2 weeks ago for exploiting the raptor in ZG in WoW Classic. Neither of these two were multi boxers.